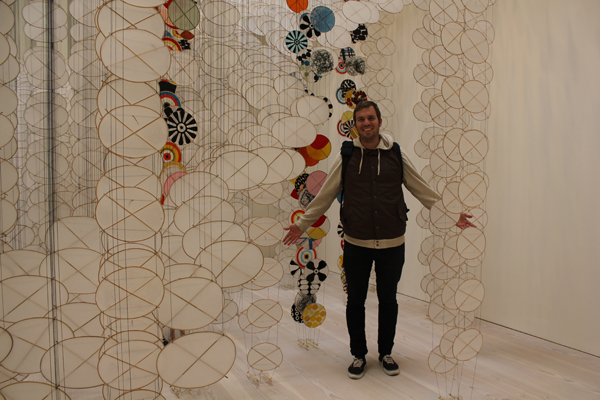 You and Paul (Senyol) spent 3 months doing an artist residency in Finland. What were the major differences between Finland and South Africa, and what things about the country made the biggest impact on you?

There were so many actually. The first thing was the weather and nature. When we got accepted for the residency we had the choice of choosing when we wanted to go and I really wanted to experience the snow as well as the summer! When we left South Africa, summer was peaking and basically you know how Durban gets. You pretty much sweat as you leave the house as it is so humid! So when we arrived the snow was starting to melt and it was pretty cold and the sea was frozen. However, in the last month we were there the sun was setting at 12pm and rising at 3am and you could swim in the sea! It was a very surreal experience.

The foundation that invited us also really looked after their artists. We had a really beautiful old house as our studio and living area, as well as a van that we could use, and they were really helpful in showing us around and connecting us with other artists. While we were there they were installing a monument for a local Finnish artist, which cost about R3 Million! I think because it’s a first world country they just have a better support structure for artists, compared to South Africa. There were also a lot of similarities though. Their new president is known as a “True Finn” if I am not mistaken and the Swedish community are angry as he does not want to support them, as the country is about 10% Swedish and 90% Finnish. It almost feels the same as the divisions in our country and how people like Julius Malema use the past to get into power and get media attention.

People obey the traffic rules in Finland. People in South Africa are impatient, rude, selfish and arrogant on the road. There, I said it.

What were your favorite and least favorite things about living in Finland?

My favorite was just being able to walk around with my wife in the town and just feeling safe. Helsinki is a really beautiful city and I could live there in a second. I like cities that are off the map a little, and I think there is beauty in that. In a way, it’s like Durban. Not many people would think about visiting it as it’s a little further away from the rest of Europe, but it’s an amazing place. Monocle magazine recently named it as the most livable city in the world. It’s small but still has that international flavour to it. I think my least favorite was the food actually! They don’t have a good selection of bread! I think South Africa has a bigger range of food, but that was about it.

What exactly did the artist residency entail?

The only requirement was that we engage with the community in some way, and that is how the project originated. I thought about the idea of painting people’s opinions in the town and then inviting them to the final show to see their painting. We also had to do a couple workshops with local schools, which was fun too. It was amazing how many friends we made there. We might even have some of them coming to visit us here in South Africa next year!

What made you decide to carry on with the project when you got back to South Africa?

Originally the idea was to actually move on to another residency after the one in Finland and interview people from across Europe, but it’s actually pretty hard getting a residency in itself and to get more than one is even harder. So I originally wanted to carry on with the project anyway, as it’s been interesting asking people in South Africa the same questions that I have been asking in Finland. I am hoping to continue this project after this show and make it bigger and better. I was approached by the KZNSA gallery to do a show in October and thought it would be fun to do it, so hopefully people will like it. I am hoping to do another residency in Canada next year.

The “Broadcasts” exhibition coming up on the 4th of October at the KZNSA National Art Gallery in Durban features yourself and a few other artists. Which artists did you choose to involve and why?

I invited Senyol, naturally, as I think we work well together. I think we have the same outlook towards life and we are inspired by a lot of the same artists as well. Christian Mugnai and myself studied together many years ago and we have been speaking about doing a show for many years now. He is a really talented artist and I really wanted him to do this as I think the world needs to see his work. Duane Smith is a photographer from Richards Bay and is a really nice guy and has a lot of talent. I also wanted to get him involved, as I think he is a bit frustrated living in the Bay, but I have a feeling big things are going to happen for him in 2012! Pete Reynolds is a really positive guy and I see so much potential in him as an artist and designer and he has always been amped to be involved in projects that I do! I only like working with passionate people who are not focused on fame but on doing work that means something more than an image or painting.

“The idea behind the exhibition is to capture people’s opinions from various communities around the world.” How have you gone about this process?

I wanted to do something that involves other people beside myself as an artist. For me, it kind of relates to what got me into bands like Fugazi and other DIY bands. I don’t like the idea of just painting a picture anymore. I find that most artists are self-centered and… well, sort of arty. I am not into that at all. I think that’s why the movie “Beautiful Losers” appealed to me when I first saw it. You know, you might go to a show and you don’t get the painting. It’s almost like you have to know the artist to actually “get” the idea behind the work. For me, that is like some kind of rock star mentality or some rich snob who lives in a house with high walls around him. I think art, in many ways, reflects society. So much of the world is about self-glorification.

This work process will evolve and I want my work to become less about me and more about people around me. So I wanted to interview people and record our conversations so that when people get to see the paintings they can listen to their stories as well, which would hopefully create a connection between the viewer, subject and the painting. I also really enjoy using the technology that we have now and it has been really interesting to get people’s feedback with the interviews that I have recorded and posted on my blog. I also have a mini site which will eventually have all the records and paintings, which can be seen here: http://www.hopeproject.co.za/broadcasts.html

What sort of involvement does RVCA and Verb have in the exhibition?

Verb and RVCA have always been companies that have supported me and the other artists involved in this project. They really helped us out on our trip to Finland, giving us some warm clothes to wear! We’re also going to be creating an installation in the gallery from the 4th – 8th of October. Verb and RVCA have kindly sponsored us the materials for the installation. We’re going to be using a series of found objects and create a giant installation, which Chris, Senyol and myself will paint over the week. We figured why not do something a little more different that just hanging paintings etc. We will then have a new band playing on Saturday night, which is the 8th of October, to celebrate the final painting/installation. People are encouraged to come round during the week to see how we progress. The band is called Strage, with ex-Crossingpoint and Monkey Sluts members, and its going to be loud!

What are you hoping that people take away with them from the exhibition?

The importance of sacrifice is something that I have learnt through this exhibition. In many ways, I have had to push aside my feelings to try and convey someone else’s opinions when painting their stories. There are so many things that I hope people get from the exhibition. I hope that people listen to some of the stories that I have recorded. There are so many. One thing that I have learnt through one of my interviews is that, if we want to change the world, we have to be willing to change ourselves through the process of trying to impart our vision with other people. For me this is an act of sacrifice, not a sign of weakness, but a sign of strength. It’s easy to defend, but hard to be open to change.