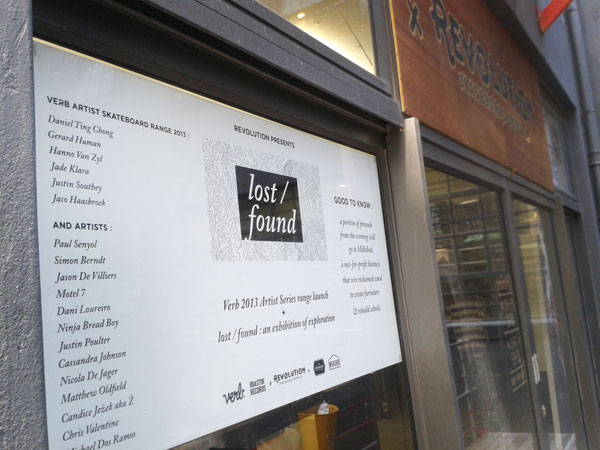 The lost/found Exhibition took place at Revolution Woodstock last week Thursday, 28 November 2013. It was a huge success. Not only were there some incredible artworks exhibited, but it was also the launch of the Verb Artist Series decks by artists Daniel Ting Chong, Justin Southey, Hanno van Zyl, Jade Klara, Jaco Haasbroek and Gerhard Human. The Kraken Rum kept the social juices flowing, and Roastin’ Records kept everyone stoked with their DJing. Milkshed, the non-profit that a portion of proceeds from the exhibition will go to, were there as well, and displayed some beautiful furniture made from reclaimed wood; a children’s bicycle, a small set of table and chairs, a lamp, and some rad stationary holders for your desk. We also put out one of the new Verb DIY decks and let people draw on it. The exhibition was packed, art was appreciated and sold, and everyone had a good time.

Thanks so much to everyone who came to the exhibition opening last night! A special thanks to Simon and Candice for curating, The Kraken Rum, Roastin’ Records, Milkshed, the artists that exhibited their work, and the artists who collaborated with Verb for the Artists Series skateboard decks. We are really proud of the series.

The exhibition is still running for another week, so feel free to drop by anytime (when we’re open obviously) and browse the art.